Anyone who reads Jack Jones' accounts of his work with the Friends Ambulance in China in my book, A TRUE FRIEND TO CHINA, will recognise a truly talented writer. It then comes as no surprise that as 'Jack Reynolds' he later in 1956 published in New York and London his best selling novel called A WOMAN OF BANGKOK, which is still in print today.

Strangely this was one of three novels published at that time having a related cautionary theme, namely that if you fall hopelessly for your Asian dream, you'll probably lose her to an American. The other two novels are Graham Greene's, THE QUIET AMERICAN (1955)and Richard Mason's, THE WORLD OF SUZIE WONG (1957).

The core to Greene's story, so well represented in the movie, is that sweet young Vietnamese girl, Phuong, leaves his protagonist, an English journalist, for the arms of a younger and of course wealthier American. The narrative, not much more than a novella, tells how this 'quiet American', in the nature of a CIA fixer, ends up dead, face down in the mud of the Saigon river.

Much of the story is set in Saigon and on my recent visit there I re-read the book yet again. Fowler, the English journalist tells his story in the first person, leading us through the labyrinth of the plot and the streets of Saigon. Important to the story is his flat in the Rue Catinat, now Dong Khoi, a fashionable street of designer clothes shops which is right in the centre. 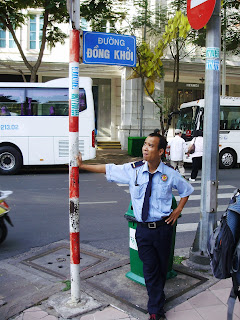 I visited there at Happy Hour and imagined the ghosts of those earlier times strolling the street in front of me as I sampled the local beer in an open fronted café. 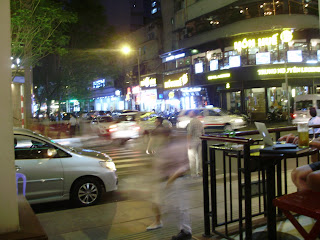 Fowler also patronised the Majestic Hotel and I strolled through its cool, spacious lobby, imagining Greene staying here and plotting the twists and turns of a great story. 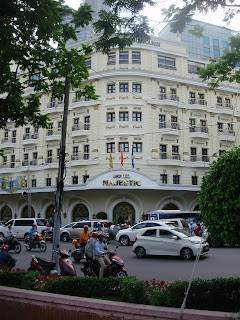 Though much of the heat and vibrancy of Asian cities is unchanging, new prosperity has changed Saigon since Greene's day, though many fine French colonial buildings would be totally recognisable to him. As a Catholic, Greene would find the cathedral familiar. 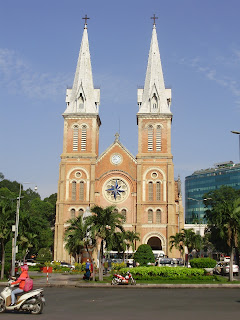 Next to it is the Post Office building, always a key communications centre in colonial cities of that time. 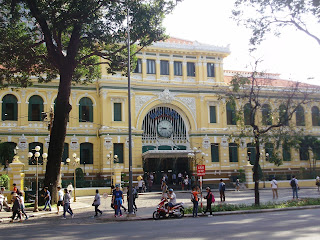 Not far away is the City Hall, now the backdrop for a statue of Ho Chi Min, Vietnam's revered national hero. 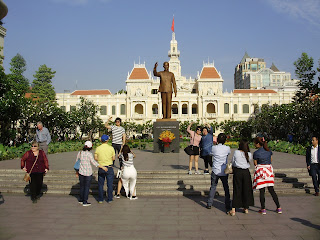 The city is booming and there are few hints of its communist identity, just the occasional poster and heroic statue, though these stand alongside the ubiquitous symbols of global culture such as McDonalds' golden arch. 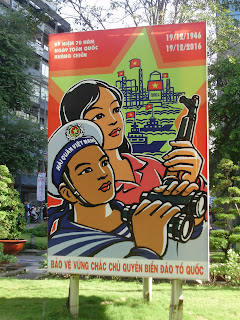 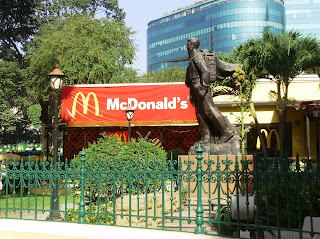 In a remarkable way, Vietnam has put the horrors of the past behind it, while for the Americans the hamburger has proved to be mightier than the sword. The irresistible popular culture of Hollywood and fast food and cars, together with close trading relations, is so very seductive... just as the lure of the Dollar proved a strong challenge for the impecunious Englishman in each of the three novels I've mentioned.

Greene's novel of 1955 came first, the Englishman, as sole survivor, triumphantly keeping his girl. In Jack's novel of 1956, Reggie loses Vilai, his 'woman of Bangkok' to Dan, the American who to a degree resembles the 'quiet American'... he likewise wears his naïve and annoying principles on his sleeve. Published a year later, Suzie Wong goes off with her American but goes back to her Englishman, this being the most anodyne and commercial of the three novels. In the very first sentence of the book he sees his Asian dream, making it inevitable that they'll ultimately sail off into the sunset together and that Mason will get rich on the royalties.

While Greene's novel must be judged the best of the three, Phuong, his depiction of the Asian dream again is not much more than a shadowy, simpering stereotype. She is of course as described by Fowler who sees her as an ingénue interested only in silk scarves and magazines about London and the English royal family, perhaps suggesting a shallow judgment. Yet I find her blandness hard to believe, especially against the steely character of an elder sister who negotiates her marriage prospects with Fowler almost like a pimp.

Most powerful of the three and the finest characterisation, however, is Jack's 'woman of Bangkok', Vilai, the predatory bar hostess known to all as the White Leopard. His book is in three parts, the first and third from the perspective of Reggie, the inexperienced Englishman. The middle part enters Vilai's own personal world and follows her as an intimate portrait for almost a hundred pages. For a European author to so vividly capture an Asian character is rare indeed.

In three successive years of the fifties we thus see three parallel stories set in Saigon, Bangkok and Hong Kong. Jack alleged that Mason had copied some of his story but this seems unlikely as the publication dates were too close together, bearing in mind the slow book production of the time. In such a context it was perhaps very likely that Brits would lose their pretty girl to an American, though it's striking that in Jack's story Vilai's son was killed in an accident, while in Suzie's story published a year later so was hers.

Thus in these three novels, hearts are broken, British resentment over American money creates a common theme, and three books about exotic eastern women become best sellers for their authors.

But which author did their local research best and got under the skin of an Asia woman brought up with a gnawing fear of poverty?

Clearly it was Jack with his portrait of Vila, the Black Leopard. It is she who is the powerful figure battling for empowerment, as we would say today, who is the memorable woman that emerges from these stories. Nonetheless, my brief taste of Saigon reminds me that 'The Quiet American' is high on my list of favourite novels.

Posted by A True Friend to China at 3:10 AM No comments: