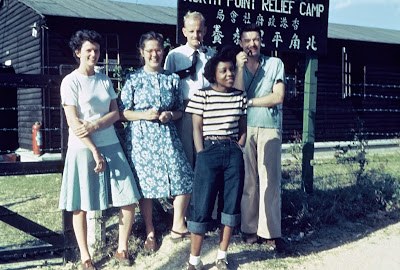 Fleda Jones, the young African American in this photo is not longer of this world. She has recently died in her mid-nineties.

The picture looks relatively recent but in fact it was taken in 1949 outside the North Point Relief Camp in Hong Kong and is of Friends Ambulance Unit workers waiting to fly into Chungking. The story is told in my book, A TRUE FRIEND TO CHINA, in which Fleda as the lab technician in Jack Jones' peoples' clinic played an important role.

What courage it must have taken for a young woman to travel alone to Hong Kong and to plunge into the vast unknown of China, facing civil war and the communist takeover, risking her life in harsh conditions in the hope of helping people and saving lives. She made an exceptional contribution but as the book will tell you her presence there led to dramatic and far-reaching consequences. This blog will not spoil the story which reads better than fiction and which strangely was later translated into fiction. Novelists always write from experience and Jack Jones as author drew on this tumultuous time in Chungking in writing his best-selling novel, A WOMAN OF BANGKOK.

About three years ago I tried tracing Fleda Jones in her home country, the USA. All I had was an address for her in the sixties. Miraculously she was still there and I managed to get her phone number. We had a long and warm chat on the phone and this personal contact meant a lot to me though I leaned little from her. She was 'busy busy' and still learning Chinese, ever optimistic in her tenth decade.

Subsequent attempts at contact failed so I sent in the sleuths. A good friend was in New York and he most generously went out of his way to visit her apartment block. but the news was not good. It seems that not so long after I had spoken to her she was taken ill and hospitalised. When she died a memorial service was held but there were no relatives which seems sad. After a life-time of medical service she had friends but they knew little about her except that she was strong and resilient, a 'tough broad'.

So finally a line is drawn under one more of Jack's co-workers in Chungking. Remarkably though, Dorothy Reuman (on left of picture) is still in close contact with me and living in West Hartford, Connecticut, while Howell Jones, standing at the back has just sent me a Facebook friends request from his home in Newfoundland.

What remarkable survivors these Friends Ambulance Unit China Convoy people were. They didn't need my book to make them somehow immortal.

Posted by A True Friend to China at 3:53 AM No comments:

"How He Brought the Good News from Hicks to Gwent"** 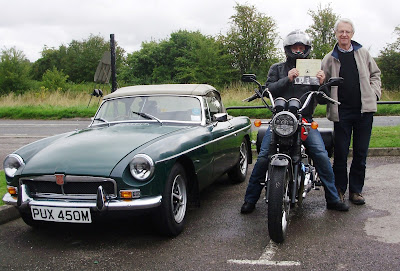 If I were to say that A TRUE FRIEND TO CHINA is a best-seller the lie detectors would ping loudly. In the US alone, quite a small country, sixty five copies have already sold off www.quakerbooks.org, which isn't bad. However, virtually all sales are to FAU families, specialist sinophiles and personal friends that I embarrass into buying one from me. Perhaps not surprisingly though, almost none go to casual readers I don't know.

But there is one striking exception, a sale to a guy I know as 'notstevejones'. This was the moniker by which he emailed me from Thailand, telling me that he had read the 'Jack Reynolds' novel of 1956, A WOMAN OF BANGKOK, and that he was smitten by it. He just couldn't wait to read my new book and to learn more about his namelysakely pseudonymous Jack Jones who had written a book so long ago that still fizzed with life and relevance.

He was shortly returning from Bangkok to his usual domicile in South Wales and, unable to await the delay in sending the book by mail, could he please drive up from there to meet me somewhere in Hampshire to get a copy more urgently. Thus at the earliest possible moment he leaped on his classic Triumph motorcycle and roared east for many hours. I leaped into my equally (almost as) fast MG and pounded at least six miles west where we breathlessly met at a rainy bikers cafe.

Definitely notstevejones and mysterious, he remained Stig-like in leathers and helmet. I thrust the book into his hands, (not one of the rare unsigned editions), and the cameras flashed. He expressed himself to be truly grateful and I felt genuinely humbled that someone should value my efforts so highly.

You may think this is all a spoof but it isn't. Five years researching a book like this is a lonely business. When published the earth doesn't move and there is a resounding silence. However, just occasionally, like last weekend, somebody really goes out of their way to tell me how much they value what I have done and I appreciate this more that I can possibly say.

Thanks notsteve! It was a real pleasure meeting you and may there be many more like you.

** 'How they brought the good news from Ghent to Aix' is a poem by Robert Browning about a crazy journey that was shoved down my throat at school. It seemed vaguely appropriate for the title above.
Posted by A True Friend to China at 2:46 AM 1 comment: