Jack Jones and his Staff at the FAU Depot in Chungking

Jack and his men had extraordinary experiences bringing medical supplies and services to an impoverished China in the nineteen forties. My task has been to discover the articles he left behind, lost and forgotten for sixty years, and to put them together in a book with over 500 illustrations to tell the story of this remarkable Quaker unit. As an NGO staffed by pacifists and conscientious objectors it was nicknamed the "China Convoy" and did remarkable work. My first task was to trace the families of the men who sailed for China and to recover their stories and pictures. What follows is a chapter telling of the success I had in achieving this. (Contact me at arhicks56@hotmail.com) 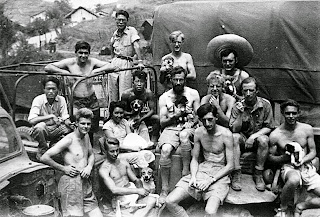 This photo of FAU staff sitting on the ex-American army weapons carrier they called, “WC for Relief” was taken at the FAU garage depot on the south bank of the Yangtse at the four and a half milestone on the road from Chungking to Kweiyang just past the village of Suu Kung Li Pan. It was probably taken in early October 1946 shortly after the transport unit closed its depot in Kweiyang and moved to the depot in Chungking. Everyone in the picture looks hot, though Chungking should have been cooling by then. Even so, a typical day time high in the upper seventies or eighties with relative humidity of 85% would feel sticky and it is no surprise that Jeanette, the Chinese hostel warden, is busy fanning herself.
****

The date can be plotted reasonably accurately by following the movements of the men in the picture. Three weeks after the move to Chungking Jack Jones wrote that Brian (Sorensen) was in hospital and Geoff (Bonsall) was down with malaria, but they’re both in the picture. A newsletter reports that in mid-October Jack and Howell Jones were flying out of Chungking probably for a meeting in Chengchow. In December Jack went to Chengtu and in early February 1947 he and Hugh Russell were en route to a staff meeting in Shanghai when their truck fell sixty feet into a ravine. Hugh did not return to Chungking but flew back to England, so an early October celebration of the move before all of these events seems to be the most likely reason for the photo.****


It has been my quest to identify all the faces in the picture and to try to trace what became of them in later life after they left China, and in this I have had considerable success.****


At centre of the group in beard and singlet is Jack Jones himself who left China early in 1951 and settled in Bangkok. There he worked as transport manager for Unicef, later taking similar UN contracts in Jordan, Africa and the Far East, interspersed with writing and journalism in Bangkok. He and his Thai wife had seven children and he died in Bangkok aged 71 in 1984.****


On his left is Howell Jones, born in 1926, who sent me the original tiny print of this photo and whose remarkable memory sixty five years on has enabled all of the British staff slowly to be identified. On leaving China he qualified as a doctor in Hong Kong, spending seven years there. After some time in England, he settled in Canada in 1965 with his English wife where he had a distinguished career as an orthopedic surgeon, retiring in Gander, Newfoundland. In June 2012 I met him off the plane at Heathrow airport and we spent a pleasant few days together at my home and visiting his sister in Hay-on-Wye in the Welsh border country.****


On Howell’s left with the pipe is Walter Kirby who trained in England for the FAU with Jack Jones and who, as aspiring artists, became close friends. Walter met his wife-to-be in Shanghai where she was working for a New Zealand relief agency and they settled in New Zealand. I have spoken on the phone to his son, David and his mother then aged 93. They told me that Walter qualified as a registered nurse in London but as male nurses were not permitted in NZ, he made his living as a plumber, retiring in 1977 in his late fifties to devote himself to painting and pottery. He died aged 77 in the late nineties.****


Back row left is Robert C. Gairns, a Scot reputed for his great physical strength. In mid-1956 he wrote to Jack that he was not happy in his job in York and was emigrating to Canada where he settled in Montreal. A technical writer for Atomic Energy of Canada, his obituary described him as a ‘good old guy, stubborn and independent’ and that his passions were Scottish dancing and gliding. In September 1999 he was photographed aged eighty sitting in the vintage glider he had spent a year restoring before its maiden flight. Tragically the glider then crashed after release from the tow plane and he was killed instantly. The funeral was held in the hangar as he was a single man with no relatives and the gliding club was in effect his home.****


The fair haired man at the back is Anthony Owen Stickings who arrived in Chungking early in 1946, sometimes holding the fort as acting boss when Jack was away. With his wife, Jean, he later worked in Sarawak as a surveyor, returning to England in 1953 before emigrating to Canada in 1957 where he was a surveyor, geography teacher and, with his wife, a church organist. They had five children, three of them adopted and his obituary in 2005 praised him as, ‘a teacher, musician, adventurer, pacifist, husband and father’. His two oldest children tell me that their mother is still living and that she has his letters home from China and also his photographs.****


To his left, the man in the big hat is Mark W. Jones. His career culminated as group personnel director at Rowntrees and on retirement he published a beautifully self-illustrated guide book called, “A Walk Around the Snickelways of York”, done in the style of Alfred Wainwright. This sold in large numbers and led to further books and a retirement career as a speaker on York country wide. In May 2011 I met him at the China Convoy reunion in London where he gave a talk and sang a ditty penned by him from his China Convoy days. He also loaned me his superb album of China photos, all meticulously captioned.****


Front row left is Mike Frankton, a chartered electrical engineer who retired from ICI to live in Darlington, County Durham. After working with the FAU in Europe at the end of the war in the concentration camps, he was an active photographer in China. He has sent me scans of about fifteen pictures of the Chungking depot including several of Jack. Howell Jones has described him to me as being, ‘the epitome of gentle strength, quiet authority and great ability’. In his late fifties he developed his early skills as a clarinetist, formed The Darlington Clarinet Ensemble and with it has traveled the world performing to large audiences. As of early July 2010, he went to Finland to visit family for six weeks.****


Seated at the front with the dog is Geoffrey Bonsall, son of a China missionary and one of two brothers in the FAU. I met Geoffrey in Hong Kong in the early eighties where he was studying the China coast artist, Chinnery. Having graduated with an MA in Classical Chinese from Cambridge and in Library Studies from Hawaii, he was a librarian at the University of Hong Kong, later becoming director of the Hong Kong University Press. He was most widely known there as a radio broadcaster under the style of ‘Charles Weatherill’. In 2010 I met his sister-in-law, Nellie Bonsall, also an FAU member, in London but sadly she told me that Geoffrey had suffered a stroke and died. I have since written an account of his career with the FAU which has been published in the journal of the Royal Asiatic Society, Hong Kong Branch of which he was a leading member and editor.****


The tall man at the front is Lord Hugh Russell, one of the sons of the twelfth Duke of Bedford, a family whose names are given to a number of prominent London streets and squares that they owned, making them one of Britain’s wealthiest families. Before arriving in China Hugh had considerable experience with the FAU in Egypt. He died a few years ago and I have spoken to his son Mark who farms in Cornwall and has a collection of his father’s letters home from China.****

The man on the extreme right is Brian J. Sorensen who, aged twenty three, was killed ten months later on 31 July 1947 when the C47 plane he was travelling in went missing in a remote mountainous region of China on the fringes of the Gobi desert. He had been flying back from delivering a truck to the British consulate in Urumchi on the trip of a lifetime during his pre-repatriation leave. Only after three weeks was it learned that the plane had, in his father’s words, “flown through the mist into the mountains – and beyond”. Brian’s ashes were scattered from the cockpit window of a plane over Honan province by FAU photographer, Lindsay Crozier, and a memorial service was held in Chungmou to coincide with an FAU staff meeting, at which Lewis Hoskins and Jack Jones gave spoken messages about him. Brian had a brother, Michael, also in the FAU, and they were brought up as sons of a non-conformist minister in Walthamstow, just like Jack whose family lived nearby. Their father, Revd. Reginald Sorenson, became Labour MP for Leyton and was later elevated to the Lords as Lord Sorenson. In 1947, Colin Sorensen, a cousin who served with the FAU Post-War service, saw a news stand in London with the headline, ‘MP’s son lost in China’. With a feeling of dread, he just knew it had to be Brian.
I have recently been in touch with several members of the Sorensen family who tell me they mourned Brian for years, but that they knew little of the recovery of the body and the rites that followed.****


The girl with the fan is Jeannette Lee Ching-hsing who was the hostel warden at Chungking. She married David Shek Yu-hwa, (the Chinese man on the extreme left) in Hong Kong on 9 October 1948. Howell Jones later visited them at their home in Hong Kong and Jeanette, who had two children, used to baby sit for Bernard Llewellyn’s children when he was there working with Oxfam. Nellie Bonsall tells me her brother-in-law, Geoffrey, had heard they have both since died.****


The Chinese man standing at the back is probably Wang Hsiao Hsin, while the one sitting next to Jack with a dog but no shirt is unidentified. However, the said dog on his lap is ‘Phoebe the Fecund’, the number one dog and champion producer of puppies who often features in Jack’s writings in the FAU Newsletter.**** 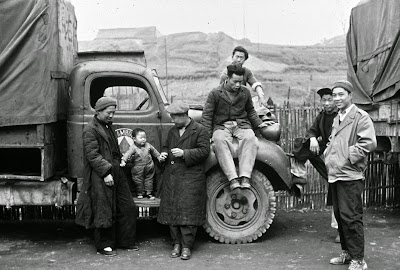