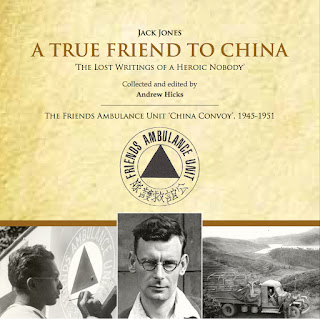 A substantial coffee table book makes a wonderful gift and, from a small print run, this one is pretty unique.

The story of a unique Anglo-American medical aid project to China in the dark years of the nineteen forties, it is both a rattlingly good yarn and also an important history. China today is anxious to ground its current place within the world community of nations upon special moments of shared friendship in the past, and there is no better example than this one.

The book is available in North America from Quaker Books at Pendle Hill (www.quakerbooks.org),in the UK from Friends House, Euston Road, London or direct from me (arhicks56@hotmail.com), in Hong Kong from the St John's Cathedral Bookstore and in Shanghai from the publisher, Earnshaw Books.

Nearly four hundred young idealists crossed the world risking their lives to try to make a difference and, in these troubled times, I want their example and commitment to be remembered. 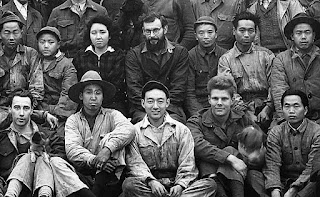 Jack Jones and the transport unit at Chungking, 1947.
Posted by A True Friend to China at 2:37 AM 2 comments:

I've just returned from China having enjoyed a very stimulating three week tour with SACU, the Society for Anglo-Chinese Understanding (www.sacu.org). We visited Beijing, Xian and Shanghai and made many visits to schools and universities where we were received and welcomed most warmly.

One side trip was to Fengxian, formerly Shuangshuipu, a nerve jangling trip across serpentine roads over mist-shrouded mountains by mini-bus. The purpose was to visit and see the restored cave dwelling of an Englishman called George Hogg and to pay tribute to his memory. 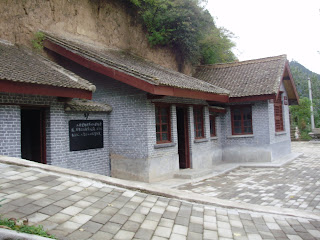 Hogg, a nephew of Muriel Lester, a prominent left-wing pacifist, visited China with her in the thirties and, moved by the struggle of the people there, committed his life to working in China. He was to be made head of the so-called Bailie School in Shuangshuipu whose aim was to give a vocational education to orphans and war refugees, thus staffing the burgeoning small cooperative factories that were supplementing China's war ravaged industrial sector. Tragically in 1945 Hogg contracted tetanus and died aged only thirty.

SACU is currently promoting fund raising for a George Hogg Fund which is to assist in the training of people to work in cooperatives in the region, hence the reason for our visit to Fengxian.

My own special interest is that the Friends Ambulance Unit, the subject of my book, A TRUE FRIEND TO CHINA, was closely associated with the Bailie Schools and the Chinese Industrial Cooperatives. Thus it was that when the FAU closed down in 1951 all of its remaining assets and personnel, consisting of a convoy of sixteen heavily loaded trucks, were donated and transferred to them.

While there we were warmly received by officials and staff at the museum of the Fengxian County Tourism Office, consisting mainly of post-war monochrome photos of people and workers in the town. There were no pictures I could see of the place itself. They were therefore bowled over when I was able to produce for them several photos of camels in the dry river bed in what was then a tiny village, taken in 1947. In the pictures is a very distinctive hill that is perfectly conical and with a temple at its summit that is immediately recognisable. While in the forties the hill was stripped of vegetation, it was amazing to compare it today, now well covered with greenery. The change in the ensuing seventy years is remarkable and struck me very strongly as I photographed the hill from my lofty hotel bedroom. 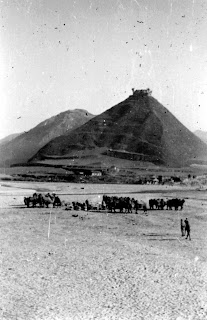 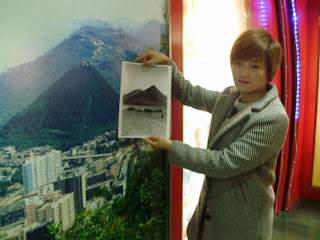 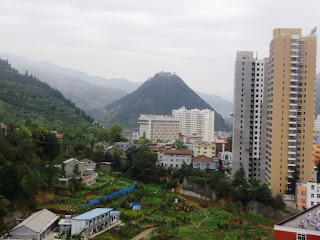 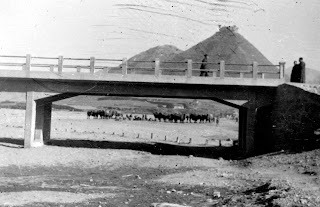 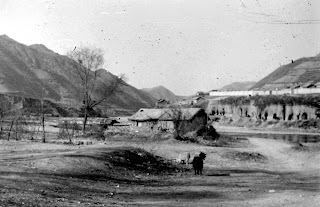 I should now perhaps explain how these black and white photos came to be taken almost seven decades ago. At that time the FAU was distributing much needed medical supplies in China, much as Medecins Sans Frontieres does today. Being an apolitical pacifist organisation it was anxious to take medical aid to communist areas as well as to those controlled by the Nationalist government in which they chiefly had to operate. However, the Nationalists energetically resisted this aid to their communist enemies and only after considerable diplomatic pressure and much negotiation was a convoy of three trucks given papers to travel from the base in Chungking to the communist base in Yenan.

Appointed to lead the convoy was an experienced FAU member, Tony Reynolds and their long and arduous route took them through Shuangshuipu (now Fengxian). As told in Reynold's full article in the Journal of the Royal Asiatic Society, Hong Kong Branch (Vol 17, 1977),they left Chungking on 23 January 1946 and arrived in Shuangshipu on 30 January. By chance they met there another FAU convoy heading in the opposite direction, on its way back from the oil wells at Yumen in Kansu province, a round trip of thousands of miles to the petrol pumps. As Reynolds describes, the town 'was a transport centre with truck depots and inns catering to every need. We put up at the China Industrial Cooperatives Guest House where we had five rooms. [See photos below]. We spent a day and a half servicing the trucks, stocking up with fuel from the Unit supplies and then had three days holiday for Lunar New Year.'

All of which this explains when and why Tony Reynolds was there to take these photos which have now been returned to the town, just short of seventy years later.

That is my immediate story about my SACU tour to China, but may I now digress a little. People often ask me why I have immersed myself in the story of the FAU and devoted myself for years to writing a book about Jack Jones and his FAU friends. Perhaps the following may suggest how I became inexorably drawn in and fascinated by these events in China that have no direct relevance to my own family story.

Back with the Reynolds convoy in Shuangshipu after their Chinese New Year celebrations, the three trucks then drove on over the mountain roads towards Xian that are still, as we found, quite challenging today. 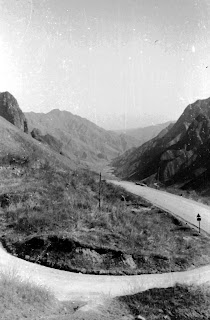 They safely arrived in Yenan on 13 February 1946 to offload the gift of medical supplies and there they met Chairman Mao himself. This date has special significance for me too... precisely one year later I was born on the other side of the world. I don't exactly remember being taken home from the hospital, but I was to live in a Warwickshire village called Tanworth-in-Arden.

Tony Reynolds and his convoy drove back to Chungking and not long after he left China and with his wife settled in this very same village of Tanworth-in-Arden, living within a mile of my home. His son Peter, and I have recently compared notes and in so small a community are sure we must have gone to the same childrens' parties. And he has of course generously shared his father's photos with me.

But my story of coincidences doesn't stop there. In 1976 I took up a lectureship in Law at the University of Hong Kong where I was allocated a comfortable flat in university accommodation. Living in one of these very same flats was Tony Reynolds, then head of the Department of Industrial Engineering. Twice in our lives therefore we lived close by one another.

At this time I was doing voluntary fund raising in Hong Kong for Oxfam and two of their overseas directors, Michael Harris and Bernard Llewellyn, who used to stay with me in my flat on their visits to Hong Kong were former FAU members. They freely reminisced about their time in China, of which I knew nothing, though I became intrigued.

Perhaps thirty years later when living in Thailand I became fascinated to learn the identity of one 'Jack Reynolds', the writer of a world-wide bestseller called A WOMAN OF BANGOK but had then totally disappeared from view. It turned out that Jack Jones (his real name) had also been a member of the FAU China Convoy and had been one of Bernard Llewellyn's closest friends.

Settled back in UK I discovered that Bernard's son, Michael, lived nearby and he produced for me a treasure trove of stuff about Jack... Jack had sent everything he wrote to Bernard and Bernard had faithfully filed it all away. One day at Michael's house we were trawling through some of these papers when we came across an A4 photocopy of an article from Hong Kong's South China Morning Post about Tony Reynolds. The story was of Tony's life-long dedication to China and how he had at last achieved his aim of again helping the Chinese people by coming to share his expertise in industrial engineering as a lecturer at the university.

At the top of this yellowing sheet of paper there was some hand writing giving the source of the cutting and the date. It was an electrifying moment when I realised that the hand writing was mine. Decades previously I had clipped the article from the newspaper and copied it for Bernard when he visited. He had kept it all that time and now it was in my hand.

Thus by so many compelling coincidences and stimulated by the wealth of material on Jack Jones produced by Michael I was slowly drawn in and dedicated myself to telling Jack's story in my book. In consequence I have been able to take Tony's photos back to China where they are now so appreciated and valued. And soon in February I will enter my eighth decade. More importantly we should remember the seventieth first anniversary of the arrival of the FAU's crucial convoy of medical supplies for the people of Yenan who had been blockaded and besieged for so long.

It is on the friendship and dedication of the men and women of the FAU such as Tony Reynolds that our current strong relations with China should be founded.

NOTE: One of the members of the FAU convoy heading back south through Shuangshipu from the Kansu oilfields was New Zealander, Owen Jackson, with whose niece I recently visited Yunnan on a trip to discover the Burma Road (see the story on this blog below). In the photos below he is seen behind the camera tripod, possibly taking the photos of the Chinese Industrial Cooperatives guest house in Shuangshuipu that then follow. He also appears in the group photo taken outside the building at the end of the avenue of trees. Again I'm sure these photos of the guest house are totally unique. 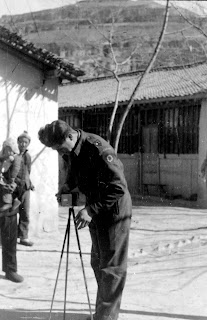 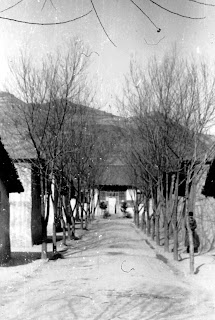 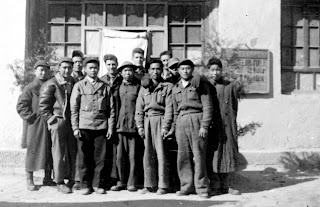